In the spirit of my Full of Grace booklist, and prompted by a conversation with a friend about two books with protagonists who happen to have the same name, I created a list of books that feature fictional characters named Ruby.

Special Note: Ruby Stevens is my favorite real-life Ruby. Her screen name was Barbara Stanwyck. I wish I could have worked with her.

I'm extremely happy to report that, in January 2010, E. Lockhart will be hanging out with readergirlz at www.readergirlz.com and readergirlz.blogspot.com to discuss The Disreputable History of Frankie Landau-Banks with readers.

This week, E. is having a blog tour, the full schedule of which is available at the end of this post. I'm flattered to be kicking things off here at Bildungsroman. We have two surprises for readers today:

First, a giveaway! The first U.S. resident to leave a comment with an email at the end of this interview will receive a set of E. Lockhart's first three Ruby Oliver books (The Boyfriend List, The Boy Book, The Treasure Map of Boys) from Random House. The winner will be contacted via email in order for the publisher to obtain a mailing address. Update: The books have been claimed. Thanks for entering! 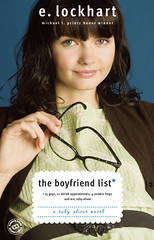 Without further ado, onto the interview!

The Disreputable History of Frankie Landau-Banks is my favorite of your novels to date. In the book, Frankie becomes the secret leader of a boys-only club - and the boys don't even know it! What inspired this story? An interest in secret societies, or consideration of gender equality? A love for basset hounds and/or boarding schools?

Sometimes, when starting a novel, I collect together ideas that interest me but which I'm not sure are connected. I read up on these ideas and let them gel together. That's what I did with The Disreputable History. It started with the idea of writing about campus pranks. Then I began looking for a reason for the pranks to exist. And I've always loved boarding school stories. I read up about the politics and history of elite boarding schools, and researched urban exploration, which was also interesting to me. And the ideas began to come together.

If you were a member of The Loyal Order of the Basset Hounds, what would your duties be?

Chronicler of Exploits. I'm actually not the master mind that Frankie is. Figuring out the pranks she gets up to in The Disreputable History took me an incredibly long time.

Ruby Oliver (aka Roo) was first introduced in The Boyfriend List. Then came The Boy Book, then The Treasure Map of Boys. The final Ruby Oliver book, Real Live Boyfriends, will be out in December 2010. I'm sure you don't want to give too much away, but I'll dare to ask if you'll share one cubby note with us in advance. Pretty please with ceramic frogs and pygmy goats on top?

From somewhere near the beginning of The Treasure Map of Boys, this is a note Ruby writes to Robespierre, the pygmy goat/confessor she's befriended at the zoo where she works. Her boyfriend Noel has just visited the family farm area of the zoo.

Dear Robespierre,
That was my real live boyfriend, Noel!
Did you see him? Did you?
Don't be jealous. You are a pygmy goat and I am a human. It could never have progressed beyond ear scratching, you and me. Besides, you have Imelda and Mata Hari, both of whom obviously prefer you to that scraggly little pretender of a goat, Kaczynski.
When you write back, please tell me: Do you think it's all going to come crashing down? Do you think this is real life? Can I really be this happy?

Over at Random Buzzers, you have been - I mean, Ruby has been giving people advice and answering their questions. What do you think Roo will be doing in the year 2020?

She'll be 32. I imagine she's making a documentary about polar bears. She's been in the arctic for some time now and is seriously jonesing for some cute vintage dresses and white chocolate cake.

Nice! What about Sadye from Dramarama, or Gretchen from Fly in the Wall?

You go, girls! Do you think Frankie will be running the country by then?

Either that or she's in a mental institution.

Which of your leading ladies most resembles your teenaged self?

Ruby Oliver. Though I was never a leper or a famous slut. My brain still worked the way hers does.

What's next for you, novel-wise?

Real Live Boyfriends, then [after that] I'm not sure! I haven't started it yet, whatever it is.

You and I share a love for classic films. Would you ever write a book set back in the 30s or 40s?

I have a half-finished novel set primarily in 1930. But I found I wasn't interested in getting all the period details right, or the rhythms of speech, or anything. I wanted to just make it up, with no pretensions to accuracy. Kind of like in Martin Dressler. Only, my book wasn't as good as Martin Dressler. I may go back to it when I think I can do it right.

For what it's worth, I think you can.

Read my 2007 interview with E. Lockhart.