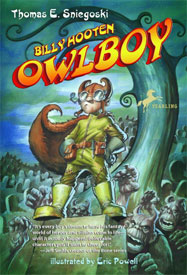 Author Tom Sniegoski took a break from saving the world to do this interview with Little Willow from Bildungsroman.

How did Billy Hooten become Owlboy?

He just happened to be in the right place at the right time to perform a kinda, sorta heroic act. And, the costume fit . . . kinda, sorta.

When did the idea for this series first strike you?

Billy has actually been with me for quite some time. Originally, my idea was to do Billy as an all-ages comic book series. After reading amazing comics that could be enjoyed by all ages -- Bone, Hero Bear and the Kid, et cetera -- I felt that there really needed to more of this kind of stuff. It was just so much fun, and I wanted to get my two cents in.

How did you get Eric Powell on board to provide the artwork?

I'd talked with a few artists here and there, but nothing really ever jelled. Finally, I decided that maybe Billy would be better off in book form and altered my original comic book pitch into a book pitch.

Eric came on board because I asked him very sweetly and batted my baby blues.

No, really, he just thought the project was cool, and wanted to try something outside of comics for a change. And let me say, I'm really glad he did. His illustrations rock on this. Amazing stuff.

Have you ever tried your hand at cartooning or any other visual arts?

I used to draw quite a bit when I was a youngling. In fact, I did all the illustrations for my high school yearbook. The ability to draw comes in pretty handy when you're trying to explain something to an artist, and words just aren't cutting it. You'd be amazed what a simple doodle can accomplish.

When did you first start writing comic books?

So very long ago, it seems. My first published comic book story came out in 1988. (Yes, there were still dinosaurs then.) It was an adaptation of a horror short story that I did for a collection of horror stories called Taboo. My next published work was a series that I did for Caliber Comics called Swords of Shar-pei in 2000.

How did you come to make the leap from comic book writer and pop culture journalist to novelist?

It got sort of tough in the comic book market in the late nineties, and I had a mortgage to pay. Around that time, I met an amazing editor over at Simon & Schuster named Lisa Clancy, and the novel part of writing career started there. I did some stuff based on the Buffy the Vampire Slayer and Angel television series.

Who do you think is your most discerning audience?

I think they're all discerning these days. People want something good - something entertaining, thought-provoking, exciting, and funny - for their hard-earned cash, and I don't blame them one bit. When I buy a book, that's exactly what I'm looking for. I want the writer to have done his job. It's what I bring to every book I write, whatever the age group.

Speaking of leaping, your bibliography has grown by leaps and bounds over the past few years, with many collaborative efforts between you and Christopher Golden. How did the two of you meet?

I think I met Chris when World War I was just about wrapping up. Actually, I met Chris in the late nineties at a horror convention in Stamford, Connecticut. He was really interested in getting into comics, and we traded secrets. I worked with him on some comic stuff, and he helped me get my foot in the door of the book writing department. In fact, he was the guy that introduced me to Lisa Clancy over at Simon & Schuster. We've been best pallies ever since.

Two Golden & Sniegoski projects - the children's fantasy series OutCast and the comic book Talent - have been optioned. Any news on either front?

Both projects are with Universal Pictures, and scripts are being worked on. That's pretty much what I know at this time.

Give us a taste of Crashing Paradise, the fourth book of the dark fantasy series The Menagerie, which you also write with Golden.

As the threat of world devouring Demogorgon draws closer to earth, the heroes of The Menagerie must square off against a collection of their most deadly enemies. I really enjoyed the scope of this one, and the fans seem to be especially excited because this is an Eve-centric book. We find out quite a bit about her past and how she came to be the way she is.

Your mythology-based quartet of novels called The Fallen became a limited series on ABC Family. The first portion aired in 2006 and had a huge audience. The second and third parts are going to air in August 2007. Have you seen any early cuts from the next part?

ABC Family is supposed to be sending me a DVD of the next four hours, and I'm [waiting for that]. I'm really curious as to what they've done. I understand that they've deviated quite a bit from the books, sort of going off in their own direction.

From what I understand, they're planning on airing the new episodes on August 3rd, 4th, and 5th. I think they're making it a whole Fallen weekend, airing the original film, followed by the new material. It's all very exciting.

You have an awesome dog named Mulder. Is he your sidekick, or are you his?

I really think he believes that I'm his sidekick, and the more I think about it, he just might be right. I've never seen a more spoiled animal. I just thank God he treats me so nicely and lets me live in his house.

If you were, say, Dogboy, what would be your coolest superpower?

Hmmmm, let's see. As Dogboy, I'd have the uncanny ability to sleep twenty-two out of the twenty-four hours a day, and be able to eat seven times my body weight in those twenty-two hours. Now THAT'S power!

Anything else on the horizon?

I've got a new series of books coming out from Simon & Schuster: Aladdin called The Brimstone Network. It's a horror/adventure series about a boy who must assemble a team of supernaturally-enhanced misfits to combat a growing paranormal threat to the world. It's a real blast [to write], and I'm wrapping up the first book as we speak. There will be three books to start, with (hopefully) more to follow. The first book should come out in the fall of 2008.

I've got two more Billy Hooten: Owlboy books on the way, then a new novel coming from Ace Books in May 2008 called A Kiss Before the Apocalypse. I'm very excited about that one, and think it just might be the coolest thing I've written.

Thanks, Tom! For more about the author, please visit http://www.sniegoski.com

The first two books in the series, Billy Hooten: Owlboy and Owlboy: The Girl with the Destructo Touch, are now available. Look for them in the kids' section and share them with your family.

Fear not, citizens! Beware, evildoers! Owlboy also protects the internet. Fly on over to http://www.sniegoski.com/owlboy/

If you're a member of the press, a blogger, or a fan who wants to repost this interview in your magazine or at your website, feel free! Download the interview as a Word DOC or as a PDF.