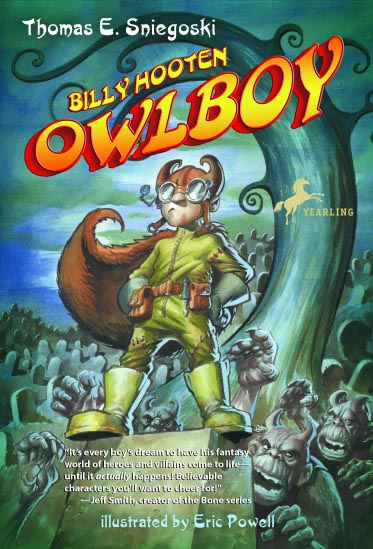 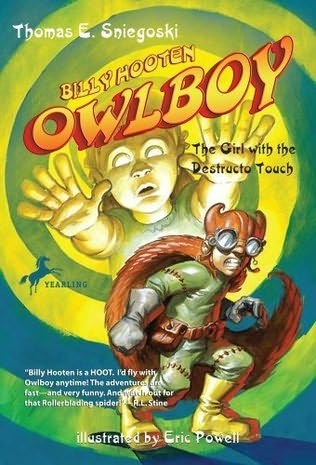 Billy Hooten, Owlboy is flying off of the bookshelves!

Have you ever dreamed of being a superhero? Wonder what it would be like if you got the chance to live that dream? If so, then you are going to love the Owlboy series!

Billy Hooten would rather read his comic books - especially Owlboy - than deal with his classmates - especially the bullies. When he learns that Owlboy's adventures may be based on real stories, and when he dons the Owlboy costume, his life changes in ways he never could have dreamed.

Where can you find walking skeletons, a talking firefly named Walter, and dust bunnies that are actually in the shape of bunnies? Nowhere other than Monstros City, a mysterious place beneath Billy's hometown of Bradbury, Massachusetts. In Monstros City, he quickly meets two allies: a tuxedo-wearing creature named Archebold and a savvy, fast-working troll named Halifax. He also encounters, among other things, Slovakian Rat-Toothed Hopping Monkey Demons, a little red female dragon named Ferdinand, a talking firefly named Walter, and dust bunnies, which are really bunny-shaped.

Between fighting evil, protecting the townspeople, riding in the Owlmobile, keeping his secret identity a secret, and devouring cloud cake, Billy manages to finish his homework and hang out with his quirky parents. He also realizes that knowledge is power - in fact, it's a superpower!

Written by Thomas E. Sniegoski and illustrated by Eric Powell, the Owlboy books are packed with adventure, action, and humor. I laughed out loud on multiple occasions. The dialogue is witty, the characters are fun, and the illustrations are eye-catching. I highly recommend this series to both kids and grown-ups.

Billy knows he's a weird kid. He likes weird things, like comic books and monster movies. He gets beat up a lot, and spends the rest of his time doggedly trying to build a robot.

Then one day, Billy Hooten hears a cry for help coming from the cemetery that borders his backyard. Against his better judgment, he runs toward it. And after that, everything changes for Billy.

Because Billy Hooten, you see, is Owlboy, a quick-thinking, goggle-and-feather-wearing superhero who protects the bizarre and monstrous citizens of Monstros City, a city that exists under Billy's hometown of Bradbury, Massachusetts. And what a city it is: full of crazy-cool gadgets, transparent oozing police detectives, and Slovakian Rat-toothed Hopping Monkey Demons, who aren't about to let Owlboy come between them and their grape bubble gum.

But has Billy bitten off more than he can chew? Is he truly worthy of the moniker Owlboy? Can superheroes still be given super-wedgies in gym class by that bully Randy Kulkowski?

Owlboy #2: The Girl with The Destructo Touch

One day, using the magical passage that will take him to Monstros City, Billy forgets to close the door to the crypt, and is followed by . . . Victoria.

Victoria is Billy's neighbor, his constant shadow, and a huge pain in the butt. Worse, Monstros City seems to exaggerate the traits people have in Bradbury -- and Victoria arrives in Monstros with something that Billy and Archebold name the Destructo Touch. Owlboy is supposed to protect Monstros City -- but has he just introduced the agent of its destruction?

What's scarier that the Sassafras Siblings and Slovakian Rot-Toothed Hopping Monkey Demons? The answer, my friends, is OLD PEOPLE. And Billy is forced to face his fears when his family picks up his great-aunt Tilley at Shady Acres to bring her home for the long weekend.

Meanwhile, in Monstros City, a mysterious villain unleashes a legendarily destructive monster: the enormous Zis-Boom-Bah. Zis-Boom-Bah eats boulders for breakfast, destroys cities with one step, and could make Monstros City disappear faster than you can say, "Godzilla." He's got the inhabitants of Monstros so riled up that the military wants to use the OMG ("oh my gosh!") device, which will destroy Zis-Boom-Bah but take half of Monstros with him. But Billy has a revolutionary idea . . . which takes him a realization about the scariest Old Person at Shady Acres.

Owlboy #4: The Flock of Fury

In The Flock of Fury, Billy Hooten learns the strange - and horrifying - truth behind Monstros City's woes. It turns out that all the supervillains Billy has encountered are under the hire of a super-SUPERvillain called the Monarch. The Monarch hates Billy -- and with good reason. But when Billy learns the Monarch's shocking true identity, will he be able to fight back against his most powerful foe yet?

The first four Owlboy books are now available in stores.

The reviews are in!

"Billy Hooten is a HOOT. I'd fly with Owlboy anytime! The adventures are fast - and very funny. And watch out for the Rollerblading spider!"
-- R.L. Stine

"It's every boy's dream to have his fantasy world of heroes and villians come to life -- until it actually happens! Believable characters you'll want to cheer for."
-- Jeff Smith, creator of the Bone series

"Sniegoski clearly knows his superhero stories and fills this book with tropes that hark back to Batman, Superman, and Spider-Man . . . This lively tale should be a hit, especially with reluctant readers."
-- School Library Journal

Things you'll only find in Monstros City
- Billy's protector and sidekick, a tuxedo-wearing creature named Archebold
- Their savvy helper, a fast-working troll named Halifax
- The Owlmobile (Billy's too young to drive, so Archebold takes the wheel)
- Slovakian Rat-Toothed Hopping Monkey Demons
- A little red female dragon named Ferdinand
- A talking firefly named Walter
- Dust bunnies, which are really bunny-shaped
- Ghost juice, which is invisible (Is the glass really half-full?)
- Cloud cake, which is light and floaty in the tummy
- All sorts of creatures in clothing
- Buildings that are alive and growing

People you'll meet in Billy's hometown of Bradford
- Billy's scatterbrained, forgetful, and loving mother
- His oblivious father
- Five-year-old neighbor Victoria and her stuffed bunny, Mr. Flops
- Cole, who runs a comic book store called Hero's Hovel alongside his seeing eye dog, Claudius
- Randy Kulkowski, a bully, and his crowd
- Billy's friends, each smart and talented in his or her own way, all totally destined to become nerd fighters (see: Brotherhood 2.0)

Some of my favorite quotes from Billy Hooten, Owlboy

He never expected evil to be quite so helpful. - Page 205

"Put your paws, tentacles, feelers, claws, or whatever you got in the air, you're all under arrest!" - Chief Bloodwart, Part 229

Author Tom Sniegoski took a break from saving the world to be interviewed. Then he shared some of his favorite quotes from the first book with me.

Billy's "friends" smiled at him like a pair of sharks at an all-you-can-eat people buffet. - Page 8

"What's going on?" Billy asked.
"Don't ask me," said the chimpanzee, adjusting the blonde wig on its head before going back to the crossword puzzle. "I just work here." - Page 106

Billy chased after the little goblin, making sure to look both ways before crossing the street. After some of the things he'd seen in Monstros City, he didn't want to take the chance of getting run over by a dinosaur passing by, or maybe even a UFO. - Page 176

"Please move aside, good citizens," Billy said, careful not to step on anybody's feet, claws or tentacles. "There is evil afoot that requires my immediate attention." - Page 179

Suddenly, it hit him with the force of a phaser on stun: an idea that could very well change everything. - Page 222

8-year-old Ryder sent in this picture of him dressed up as Owlboy for Halloween. (Click here for the full-sized image.) How awesome is that costume? Way to go, Ryder!

Be Your Own Superhero

Fly over to the Owlboy website to learn more about these fabulous books!

PR types can pick up the Electronic Press Kit (EPK). If you promote the release at your blog or website, please let me know!

If you were a superhero, would you keep it a secret? Click here to answer.

You must remember this: Imagination is a superpower!