Thou art thy mother's glass, and she in thee Calls back the lovely April of her prime.

I'm always attracted by fiction which explores this complicated and important relationship and the choices that come with it. Coe Booth's second novel, Kendra, tells a mother/daughter story that's just as complicated as the one you might know. The decisions are difficult, but the relationship is sometimes tricky, and there are some bitter, painful disappointments -- but there's so much potential for happiness, too. Will Reneé ever be able to be a good mother? Having seen all the trouble some choices can make, will Kendra make the same mistakes as her mother?

People say that a daughter is like her mother's earlier reflection in a mirror. (Well, Shakespeare says it a lot better.) Unfortunately for Kendra, the fact is, even when we don't want to be, we're sometimes a lot like our moms! Fortunately, our brains are our own, so regardless how the mirror reflects our sameness, our mistakes will be all ours, too.

By the time she was twenty-three, my mom had three kids under the age of five. We were stair-step close, a year and a half apart, one-two-three, and Mom, who had been her senior class valedictorian and prom queen, turned down a full college scholarship for... babies.

Well, I'll tell it to you straight: even when I was little, that freaked me right out. To me, babies were cute, and all, but what I really wanted was a book or sixty, a cushy chair, and a lamp right over my shoulder. Oh, and some popcorn, preferably hot. And a smoothie. And peace. And nobody calling me, crying for me, nobody drooling, nobody teething or upchucking or needing Vitamin E. cream slapped on a chapped baby backside. No, thanks. I couldn't believe my mother turned down a full ride to a state university to have my oldest sister. I always said, "But, Mom! Why didn't you just give her to grandma?"

("And, why couldn't grandma have just kept her?" For some reason, my oldest sister always smacked me about this point in the story.)

When my mom found out she was pregnant, her mother could have bailed her out, as Reneé's mother did for her. But at that time, a lot of my mother's classmates had kids first, and went to night school and junior college to put their education second. My mother didn't want anyone else to raise us, and so, she did what was expected. She got married. She had a family. Then, when I was in the fifth grade, Mom decided her youngest daughter was big enough to fend for herself, and went back to school. 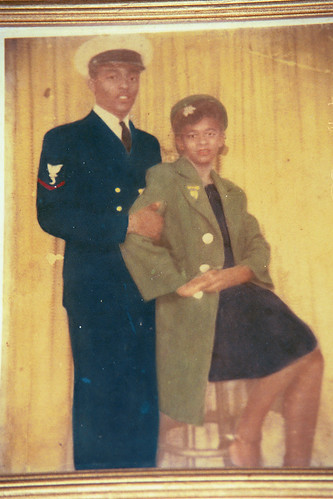 My Mom's mother, Anita, got married in 1944, at the age of (drum roll, please) ... fourteen. Only three years before, her world had changed, when the Japanese bombed Pearl Harbor, and the United States entered into World War II. Anita's beau, Wilbur, was all of eighteen, and he was being called off to serve in the Navy. As so many girls of that day and age did, my grandmother got married, and was left a fifteen-year-old pregnant bride who wasn't sure if her husband would ever see their child. Unlike in my mother's case, education wasn't a concern. No one was offering my grandmother a scholarship, because she dropped out of school in the third grade, to clean houses and help her mother take care of their family.

That's an olden-days pattern, in my family. Daughters changing their plans to help their mothers, doing whatever it took to keep all the siblings together and keep everyone clothed and fed.

My grandmother's story ended happily -- her beloved Wil returned from the War, and gifted her with thirteen more children. Those that survived gave my grandmother six healthy daughters, and six healthy sons. Enough for a football team, or a band. They had education and enough money for all of the daughters to do what they wanted. None of them had to drop out of school. None of them had to work before they were ready. My mother had the luxury of choosing what she wanted to do, and even though her choices would not be mine, I can't help but be glad she had a choice.

My mother's decision to stick with her kids was a tough one -- and when she became a foster mother years later, it was a choice she made for a reason - to help other moms do what they had to do for their kids -- get a better housing situation, get more education, serve their time or give up their babies, and give them a chance to be raised by another mother. For my sisters and me, my mother pays forward a chance to make a choice for someone else.

Mothers and daughters. A relationship made up of reflections, of how much we are the same, of how we choose to be different. I'm a lot like my mother, in ways I don't yet even see. But my choices... and my mistakes ... are all my own.