Mindy Kaling Loved The Westing Game and The Baby-Sitters Club 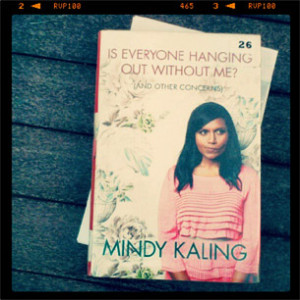 Reason #458769 Why Mindy Kaling Rocks: In an interview with Sara Benincasa for Bookish, actress/writer Mindy Kaling discussed the books she loved reading when she was growing up:

Bookish: When you were a little kid, what was your favorite book?

Mindy Kaling: I loved a book called The Westing Game, which was a murder mystery. It didn't really condescend to kids, which I liked. I'm very sensitive to books that are condescending, and I felt that book was just a great, well-written mystery thriller that happened to be popular with kids.

Thumbs-up, Mindy! In elementary school, one of my favorite books was The Westing Game - and I'd still love to play Turtle Wexler. I'm completely serious. Sign me up.

In the aforementioned article, Mindy also mentions The Baby-Sitters Club, Encyclopedia Brown, and Sweet Valley High. Leave a comment below if you read those series as well!

Mindy wears many hats on the new show The Mindy Project: lead actress, writer, creator, producer, all-around rock star. You may also recognize her from her role as Kelly Kapoor on The Office. She was also a staff writer on the show. Here's some trivia from Wikipedia: "Kaling first joined The Office as a writer when she was 24, as the only woman on a staff of eight, and then took on the role of character Kelly Kapoor. She has written at least 22 episodes, including [the episode featuring Jim and Pam's wedding] Niagara, for which she was co-nominated for an Emmy with Greg Daniels."

Looking for something fun to read? Pick up Mindy's light-hearted memoir, Is Everyone Hanging Out Without Me? (And Other Concerns). I highly recommend it.

This blog post was first published in December 2011. Updated in September 2012 to add:

"I don't understand how and when she sleeps," says Barinholtz. "There are nights where she'll be taping until two in the morning and I'll come in earlyish, and she'll already have been there, in a good mood."

Another high-five for you, Mindy. If I had a nickel for every time someone asked me:
"Did you sleep?"
"Did you sleep here?" (at work/the set/the theatre)
"Do you ever sleep?"
"What time did you get up?"
"Why are you in such a good mood?"
- I'd be rich.

Best of luck to all those involved with The Mindy Project. I hope it rocks.