Death of a Kleptomaniac by Kristen Tracy 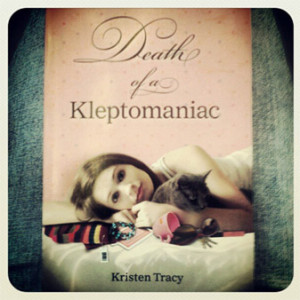 Molly is sixteen years old. She's got a dad, a very pregnant mom carrying a future sibling, two crushes (one of whom has a girlfriend), and a cat. Those are all hers. She also has a pearl ring, a ring of keys, and some other stuff that isn't hers. What I'm about to tell you shouldn't be considered a spoiler, since the book's title tells you: Molly stole things, and Molly died. (Those two events are NOT related.)

Unlike some other books about thieves, this isn't a book about the protagonist being brought to justice, being hit by karma, or going to rehab. While I do like stories about redemption, this particular story is more about Molly herself, about who she is, not what she did. She didn't steal things to get attention, or to break the rules; she stole when she was freaked out, an impulse disorder. A really nice scene late in the book explains the origins of this compulsion.

Unlike some other recently released YA books about death and the afterlife, Molly's not put on a quest to live again. She doesn't want to die, and she'd really like to keep on living, but once she realizes she can't, things change. In a way, her death forces her to grow up. She sees her family and friends in a new light, and discovers who genuinely cared about her, and who did not.

Kristen Tracy's protagonists tend to be different. I'd say quirky, but that's not exactly what I mean. Also, some people don't like that word, and/or think that it means less than sane or abnormal, and it doesn't mean that. Perhaps I could say off-center, but that too has negative connotations, sadly. So how to describe Kristen's leading characters? Now I finally know exactly what to call them: unique thinkers. I have unashamedly stolen this phrase from the book, and I wouldn't mind it one bit if someone called me a unique thinker.

One of my favorite exchanges in the book:
"How old are you, seventeen?"
"Sixteen," I say. Which will forever be my answer to that question.

"I was in the middle of everything," I try to explain. "I was just starting to figure things out."
"Everybody feels that way," [she] says. "Even the ninety-year-olds."

Withholding details, avoiding spoilers: All you should know before opening the book is Molly's death is accidental, and that her journey afterwards is very personal, very engaging, and not all religious. I sped through this book, eager to see what happened next, enjoying Molly's memories (and her cat!) and mourning her loss - for as her family and friends lose her, she loses them as well. When I turned the final page, I missed Molly, but I was glad to have met her. Well done, Kristen Tracy. Well done.

For those I've known who are also forever teenagers: You are missed. You will always be missed.
B, I read a book last week that you should have read. You would have read. I hope you were reading it over my shoulder.