The Story of Us by Deb Caletti 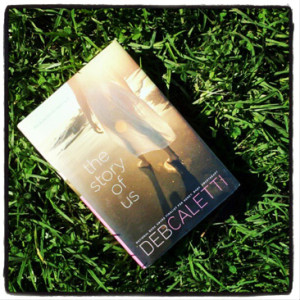 Cricket, a recent high school graduate, her slightly older brother, Ben, their mother, and their faithful beagle, Jupiter, have packed up their belongings and sent the boxes ahead to a new house. Before moving, they'll spent a week with their mother's fiancé and his two daughters as well as other relatives and close friends, all gathering to take part in their mother's wedding. The only person missing will be Cricket's long-time boyfriend, Janssen, whom Cricket is purposefully, regretfully holding at arm's length. The circumstances which created this distance are explained as the book progresses, mostly in the letters Cricket writes to Janssen.

Since she tells her story in first-person, it is easy to get inside of Cricket's head. The letters add another level to the narrative, since they are being directed from one character to another, using not only "I" and "me" but also "you" and "us." These emails come just frequently enough to keep readers invested in that plotline without feeling as though the messages are interrupting the current events, the week of the wedding. The use of the letters to develop the backstory is effective and feels appropriate for the character as she tries to wrap her head around what happened; she's writing these things down for herself just as much as she's writing them for Janssen.

Cricket's correspondence with Janssen often includes lists concerning man's best friend. The lists have titles like Five Amazing Dog Facts; The Ways Dogs Show Their Utter Devotion; and What Us Humans Could Learn From Dogs. Some of these facts and considerations are, of course, canine-specific, but others could be applied to other pets and people as well. My favorite items include:

How to make the most of what you've got: If all you have is the hard floor, find the spot of sun.

How to be loyal: Stay near, never forget, and fight for what's important.

They will try their very best. They will run too far; they will sit and stay and wait forever, all because you asked.

Cricket's immediate family is very close. They count themselves as "three-and-a-half" - one mom, two kids, and a dog - and they have in-jokes and gentle teasing that can only be cultivated within a loving family. Their propensity to laugh at inappropriate times, like at funerals and other awkward moments, appears to be hereditary. Their family's foundation, which was built and rocked and broken by their abusive father, is amazingly solid and wholly believable. Daisy, the mother, divorced that man years ago and is now a strong, successful woman, having raised two kids mostly on her own and writing a line of kid's books about Monkey M. Monkey.

After a few failed relationships, all of which Daisy ended abruptly but not really unexpectedly, she is now ready to commit to Dan Jax, a man who "always tried hard. You got the feeling he was always trying to make a kite fly in no wind if it made other people happy. It made you wish he'd wake up one day, open his window, and see a hundred kites flying all on their own."  His kids, Hailey and Amy, are right around Ben and Cricket's ages, but while Hailey gets surprisingly chummy with one of Cricket's friends, Amy's I-don't-want-to-be-here attitude is like a raincloud ready to pour on the festivities.

All of the characters have their place here. Consider how a group of people acts when they are thrown together at wedding or family reunion or school event or social something, when it's a mix of friends and relatives and people who have never met and people who have known each other their entire lives - that mix of people can be both amusing and agonizing with all of their love and kindness and strangers and strangeness and catch-up and avoidance and questions and answers and torment and merriment. Cricket's grandmother and great-aunt, a pair of sassy sisters who are always ready to take on the outlet malls, are a hoot. Things get even more interesting when Cricket's grandfather and his associate show up. Cricket's best friend, Natalie, has a small but important role. Natalie is described brilliantly as the girl whose hair "had character," the girl who had "relaxed smarts," the girl who "would bring you some great book because she was a book matchmaker, because she loved books the way other girls loved clothes." Let's not forget about our four-legged friends: Though younger, bigger, and louder than Jupiter, Dan's dog Cruiser soon learns who's boss.

Then there's Rebecca, Ted, and Ash, the family that owns Bluff House on Bishop Rock, the place where everyone's staying for the wedding. The beautiful location makes you want to sink your toes into the sand. All of the best summer stories seem to be infused with salt air.

I appreciated the fact that the book started right off with the move, instead of having that come at the conclusion of the story. With Cricket being in that transitional time between high school and college, that day she leaves her childhood home but does not have a new home just yet is a perfect place to start her story. Also, having change touch Cricket from the moment we meet her makes sense, as that's something she struggles with throughout the book: what to hold on to, and what to let go. How we react to change shapes us in ways we don't even realize, sometimes; sometimes, we're so concerned with what change will take away from us that we neglect to see the good things that change may offer us.

Change - sometimes it's some great big event, right? One major episode that means nothing will ever be the same. Birth, death [...] a wedding, a hand striking, an announcement. But often, I think, change is slow and quiet, it sneaks in like the seasons, where you don't even notice the shift until the trees are all orange or snow is falling, or it's so hot that you are desperate for a swim. - from one of Cricket's letters to Janssen

Cricket yearns for the familiar, for her hometown, her family, that house, and yet: [T]he ties that held me to everyone [...] felt like ropes sometimes, anchored to the ground at one end, to a hot-air balloon on the other... Someplace inside of me felt that I needed to cut those ropes in order to rise up and see the countryside. That same place inside also knew how dangerous it would be to be so, so high.

I have a thing for names. If you ever discuss a book, a play, a TV show, or a movie with me, ask me which character's name I find the most suitable, and you'll get points with me. The Story of Us not only includes two of my favorite character names, but it also explains the protagonist's unusual name early in the book - Cricket is short for Catherine, they've always called her that - simply, and without any future incident or jokes. Also, their last name is Shine, which is one letter removed from one of my favorite words.

I finished reading this book on a beautiful day that was full of sunshine, memories, and emotion. Just look at the picture I took, nestled in the top corner of this post. Cricket and Jupiter would have liked this day, I think. And if you liked Caletti's previous novels, especially The Nature of Jade, you'll like The Story of Us as well.