The Dark Unwinding by Sharon Cameron 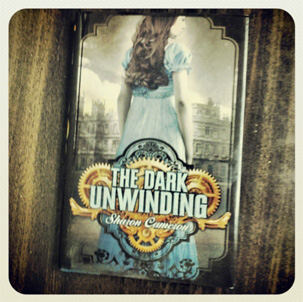 Unbeknownst to her, as she approaches the age of eighteen, Katharine will have to make a decision that will change her life, and the lives of many others. The year is 1852, and Katharine has been sent to her uncle's estate by greedy relatives who need him to be declared legally insane in order to collect the inheritance.

At first, Katharine thinks she'll report the truth, either way - "Whatever Aunt Alice chose to do with any information I gave her was neither my responsibility nor my sin." (Page 57) - but once on his property, Katharine realizes that her uncle is not insane, just not mainstream. As Katharine becomes closer to her uncle and interacts with the people in his community, she begins to soften up to them. But when she lets her guard down, she makes herself vulnerable to those who would wish her harm. She struggles to keep her wits about her while deciding who to trust. In order to protect her uncle, she may have to lie and risk her status in society - and, unexpectedly, risk her life.

If you loved Walter Bishop on Fringe, then you are sure to have an affinity for Katharine's uncle Tully. He is an inventor, a creator of automata, brilliant with numbers but easily overwhelmed by disruptions to his schedule, by strangers, by anything or anyone that upsets his routine. Were he living in present day, he would possibly be placed on the autistic spectrum, but as this is the Victorian era, he is considered eccentric by some and crazy by others.

Steampunk is, technically, simply, a story that involves machines powered by steam. Some steampunk novels involve more sci-fi elements than others, stretching the imagination and dipping into something more fantastical, while others, like The Dark Unwinding, stick fairly close to realistic science. Most, if not all, of the creations in this story are explained, moving pieces that are based on clockwork and other such mechanisms. Uncle Tully needs help bringing his creations to life - and that's where Lane comes in. Tully just does "the numbers and the pictures. Then Lane takes my pictures and brings back my pieces and I put them together until they are what they should be." (Page 38)  Moody Lane, with his dark hair and gray eyes, is clearly the counterpart to Ben, the smiling blond boy. Both assist Tully; both connect with Katharine. Meanwhile, she clashes with Lane's aunt, Mrs. Jeffries, and tries to coax her ward, young, mute Davy, to communicate. Davy doesn't speak or write, instead clinging to his everpresent rabbit, Bertram, and saying everything he needs to say with a simple gesture, a tug, or the look in his eyes.

Katharine's maid Mary talks a mile a minute, much like I do. I loved her fast-paced monologue on page 44. Katharine, trying to process everything Mary's saying, simply blinks in response - and Mary just keeps right on talking. It was the perfect introduction for her character. Mary's exuberance energizes every scene she's in.

I enjoyed The Dark Unwinding, and the fact that it was rooted in science and in truth. I greatly appreciated the fact that, even though a sequel was coming up, this book wrapped up most of the stories and thus can stand alone. That being said, I look forward to reading the sequel, A Spark Unseen, when it is released in October 2013. It should be interesting to see what happens next.

Also, I want the dress that Katharine's wearing on the cover of the book. She reminds me of Wendy Darling there.

My favorite lines from the book include:

Life at Stranwyne hung by a ribbon, a ribbon that was currently tied to my hand. - Page 49

But people, in my experience, could be sorted like numbers: evens, odds, groups that could work together, and others that could not. My uncle was someone I could not sort at all. - Page 70

I also enjoyed every single time Uncle Tully refers to Katharine as "Simon's baby!", complete with exclamation point, and this:

"Listen, little niece!" he'd yelled over the dun. "They are telling us when! Listen to the clocks tell us when!"

Dear Uncle Tully, and everyone at large: Numbers are so beautiful. I hope the clocks soothe you. Good night, gentle readers.

Read my review of A SPARK UNSEEN by Sharon Cameron, the second book about Katharine Tulman.