The 14 Fibs of Gregory K. by Greg Pincus 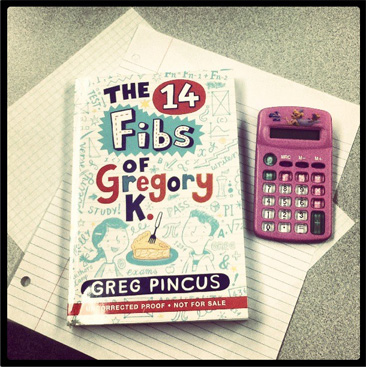 Eleven-year-old Gregory Korenstein-Jasperton really likes writing - but no one in his immediate family knows it. His dad, his older brother Owen (often simply called O), and his little sister Kay are all really good at math. Really good. And while Greg gets basic math just fine, his head starts to spin when his relatives and teachers start discussing more complex mathematical theorems. He'd rather be hanging out with his best friend Kelly at The Slice, her mom's bakery/coffee shop, eating a piece of warm apple pie while they read each other's stories. Kelly can't wait to go to Author's Camp, and Greg lets her believe that he's going to go, too. He'd love to spend the summer writing, but he knows his parents would rather he attend Math is Magic Camp. ("Dad, I don't want my days to be 'mathemagical.' Please.") His family really does mean well, and so does Greg - they just want different things.

It's time for Greg to bring his math grade up. His friendly math teacher Mr. Davis gives Greg a journal so he can write about math - what he thinks about it, times when he found math it in the real world, how he can and does actually use it more often than he thinks - and improve both his understanding and his grade. Meanwhile, Greg finds himself saying he's going to enter the City Math competition, hoping it will make his parents happy even though he really doesn't want to do it. His dad won the City Math competition the first year it was held, and his brother has won the event multiple times. Greg holds his tongue, not even telling Kelly, or Mr. Davis, or his mom, a woman know for her enthusiasm and her...interesting Wednesday night dinner concoctions, about what he's really going on. As the school year races on and it gets closer and closer to deadlines and event times, Greg grows increasingly worried that he's going to disappoint everyone, especially his dad and his teacher. Along the way, he discovers the Fibonacci sequence, and is surprised to find a way to combine his love of writing with his math project.

The 14 Fibs of Gregory K. is a story about learning to follow your heart. Greg Pincus' debut novel is filled with scribbles, secrets, slices of pie - and π pi! Though Greg deliberately or impulsively doesn't tell the whole truth sometimes, it's important to note that he isn't a compulsive liar. Instead, he's the type of person who will side-step questions and avoid certain subjects and conversations as much as he can for as long as he can. And who doesn't do that when they're uncomfortable, or ashamed, thinking they aren't living up to the expectations of people they care about, people they are trying to impress or comfort? Greg has a good heart, and readers will feel for him from page one. Kids who are passionate about their favorite hobbies or have secret talents of their own will want Greg to talk about the write stuff with his family and friends, and will be satisfied with the ending of his story. (Though they'll probably want Pincus to write a spin-off about Kelly, or maybe a book about Kay. I know I'd read both!)

A peek inside Gregory's mind:
I understand why we have English class. But math? I'm really trying to solve for "why"... - Page 126

A glimpse of his best friend, Kelly:
Kelly danced around him, pirouetting, spinning, and moving her arms in a mix of ballet and sheer, gleeful spontaneity. - Page 176
For those of you just tuning in, this is me.

My favorite line in the entire book:
"I've taken photos, but I'm working on memories." - Page 198 - This is part of something I won't spoil for you.

I recommend The 14 Fibs of Gregory K. by Gregory Pincus for elementary school readers, third grade and up.

Kudos to Linzie Hunter for designing the cover of the book. I like her style in general, and I really like what she created for both this book and for Too Cool for This School by Kristen Tracy. I also love this piece at her website.

In case you didn't know, I love numbers and patterns. I see them everywhere. I also like writing and reading. I hope this book reaches kids who like any part of any of those things as well as kids who maybe don't "get" some of those things but will appreciate them more after they've read this.

And for the adults out there, please remember that it's important to celebrate the talents and interests of all of your offspring, or patrons (hi, librarians!), or students (thank you, teachers!) One child may be naturally gifted at something while another child has to work really hard at it. Encourage and support those with an insatiable thirst for knowledge as well as those who are passionate about creative endeavors. We should all be so lucky and so moved to do what we love and love what we do.

I cross-posted this review at GuysLitWire.

Visit author Greg Pincus at his blog, Gotta Book, where he posts about books he's written, books he's read, poetry, and more. Click here to read his first fib and discovery the poetry of numbers.