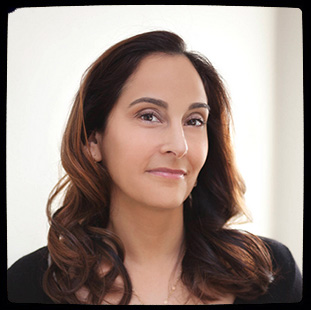 In 1974, Ronald DeFeo Junior killed all six members of his family in their home in Amityville, New York. A year later, another family moved into that home only to move out 28 days later, saying they were terrorized by something paranormal in the house. Their story was captured in a book by Jay Anson, then subsequently retold in various films and other adaptations.

In Micol Ostow's new novel Amity, we meet two teenagers who live in Amityville at two different times. This is not time travel; instead, they alternate narrative duties, weaving their stories together chapter by chapter. Inspired by the real story but wholly fictional, this YA book is now available for late night reading. But I promise, this interview is not scary, and neither is Micol.

Do you recall the first time you heard about the Amityville Horror?

The first time I heard about the Amityville Horror was when reading Stephen King's Danse Macabre, where he talks about the components of an effective horror movie. In fact, I didn't realize it was based on a true story (and that there was a bestselling book about the original crime!) until much later. Once I became interested in a riff on Amityville as a possible subject for a novel, I went back and read the original book by Jay Anson, as well as High Hopes, the book written specifically about the DeFeo family (as opposed to the Lutzes, who moved in after the DeFeos' murders and claim to have experienced hauntings within).

When did the seed for your novel Amity firmly plant itself in your brain?

Around Halloween, 2011. My novel Family had come out in April and I was tossing around ideas for the next book under contract. My husband was out of town and I was indulging in my favorite guilty pleasure: horror movies and Red Vines. The Amityville 2005 remake was on, and something clicked. But it wasn't until several months later that I had a pitch to show my agent, and it was a few months after that before we put something together for my editor. I went back and forth a lot trying to decide whether I wanted to tell the Lutz family's story, or the DeFeos' story. Both concepts – the "possessed," murderous son, and the beleaguered, haunted successors to the house – were equally compelling to me. Ultimately that's what led me to tell two alternate narratives, set ten years apart. That way I didn't have to choose! 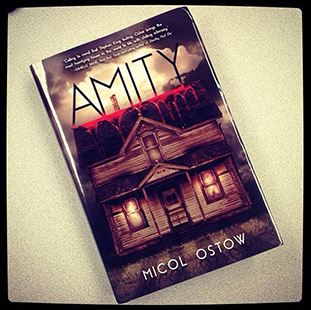 When you started writing the book, did you know the ending? (Readers, don't worry - we kept this answer spoiler free!)

I one hundred percent knew the ending, and it didn't change one bit, strangely. Maybe a hint of clarification here and there. Some of the supernatural bits tend to read more straightforward in my brain than on a first-draft page. But it was an interesting process as compared specifically to Family, my first book with Egmont. The ending to Family changed three times, as did my feelings about where the protagonist needed to be, emotionally, by the story's end. This one was much more clear-cut. The two narratives needed to converge and I could only really see one way for that to happen.

Have you ever been to Amityville, New York?

We have family out on Long Island and therefore drive past the Amityville exit on the LIE several times a year, at least. I always point it out, like a huge dork. But I've never visited the house and to be honest, at this point, I probably wouldn't. It's been renovated heavily so specifically, those iconic half-moon “eye” windows are gone. And more to the point, there's also the fact that 1) it's a little icky to make a spectacle of a place where a family was murdered and 2) it's actually a private home, where people live. Personally, I prefer the make-believe versions of the Amityville story and am happier to spend my time there.

You've written for a number of different audiences - kids, teens, adults, fantasy, comedy, mixed media. Do you consciously try to mix it up?

I really don't try to mix it up, believe it or not! It just seems to work out that way! I was fortunate enough to come into publishing through the back door, in that I worked as an editor in the work-for-hire realm. So some of my earlier contracts were the results of editors seeking me out and offering me the chance to work with them. (Note: this is not the typical author's path to publication and I am very, very lucky. Trust me, I know!) The Bradford Novels were the product of an editor's original concept, and Emily Goldberg Learns to Salsa came from a publishing friend suggesting I mine some of my own adolescent experiences and pitch her a story. Even So Punk Rock was actually originally conceived of by my brother, David Ostow, who worked with me on the story and illustrated the book.

Family was the first novel I sat down to write, as they say, "on spec." And because it wasn't under contract and was coming purely from me, I was free to experiment. I had no idea when I sat down to my computer that what would come out was going to be such a massive departure from my previous work. But once it was published, it was treated as a sort of literary debut. So for Amity, I was much more conscious of trying to write something that would match Family in tone and audience.

What genre or audiences would you like to write for that you haven't yet?

As far as what's coming down the pike that's different, I have a chapter book series releasing this spring called Louise Trapeze, about a little girl in a circus family who wants to learn to fly on the trapeze but is afraid of heights. Talk about a departure!

Have you always been drawn to the horror genre?

Yes! My mother is a huge horror buff and always had the TV set to old B-movies, and scary-covered novels on her nightstand. They completely terrified me but obviously burrowed into my subconscious.

Love them both! Although in general, I watch a broader range of horror movies than I read horror novels. The only category of horror I really stay away from is the straight-up torture. The extreme gore really doesn't do it for me. With the books I tend to lean more heavily toward literary horror or dark thrillers as opposed to paranormal... and basically anything in the Stephen King cannon.

First horror story that gave you goosebumps: The Dollhouse Murders by Betty Ren Wright
(Little Willow adds: I liked that book, too!)

Horror movie or book that you love but can only watch or read in the daylight: It by Stephen King

Favorite season of American Horror Story: Season One, Murder House, was amazing for just flinging all the fundamental tropes at the wall, and doing something different – and genuinely scary! – on TV. And I absolutely loved that finale.

Favorite Halloween costume you've worn: I'm super boring on Halloween! I love celebrating and decorating and eating treats and watching movies, but I rarely dress up. I'm kind of a party pooper that way. Last year I wore my “Overlook Hotel” tee-shirt and called it a day. But my daughter usually cycles through at least three costumes over the course of the festivities so I think that evens us out.

Ouija board: Wouldn't touch it with a ten-foot pole or bring it on?
I'm a little superstitious. I'd rather not tempt fate.

Ghosts and/or haunted houses: Believe, don't believe, or open-minded?
I have not had any paranormal experiences myself, but as per the above and being slightly superstitious – I do believe, actually. Kind of. Let's call it open-minded. That works.

What's your favorite ghost story? Leave a comment below with the title of a book, movie, or play that chills you -- or even a personal story!
EGMONT USA is giving away a signed copy of the finished book to one lucky USA/Canada resident, the person who left the first comment at this post - Congratulations, Kim B.!

Micol is also visiting the readergirlz blog today. Check out the full schedule at the Egmont USA website.