Kathy Kacer and Jordana Lebowitz earned the Sydney Taylor Honor Book in the Teen Readers Category for To Look a Nazi in the Eye, their recounting of Jordana's true story: At age 19, Jordana, a granddaughter of Holocaust survivors, attended the trial of Oskar Groening, known as the bookkeeper of Auschwitz, a man charged with being complicit in the death of more than 300,000 Jews. Jordana realized that by witnessing history she gained the knowledge and legitimacy to be able to stand in the footsteps of the survivors. 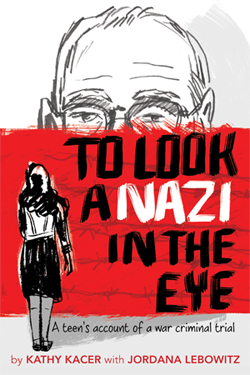 Tell us how your family's history inspired your career.

I’m the child of Holocaust survivors and grew up listening to my parents talk about their survival experiences. I grew up not only in a family of survivors but also a community of survivors. And even as a child, I remember being fascinated by all of those stories. One of the stories that inspired me was the story of how my mother had hidden in a dresser that was in her mother’s dining room while Nazi soldiers were searching through the home looking for her. That story actually became my first book, The Secret of Gabi’s Dresser. I believe that my parents had some kind of innate sensitivity about how much information to tell me at each stage of my  development. And I grew up, not terrified of what was a terrifying time in history, but proud of this history and inspired by it, and determined to write these stories down.

How did you come to meet and work with Jordana Lebowitz?

Like many, I had been following the trial of Oscar Groening, one of the last Nazi war criminals to stand trial in Germany in 2015 for his role in Auschwitz. I wanted to write
about the trial but was struggling to find a way to tell this important story. And then I read an article in a local newspaper about a remarkable young woman who, at the  age of nineteen, had decided to travel to Germany so that she could be an observer at Groening’s trial. That young woman was, of course, Jordana. I thought that telling the story of this trial through Jordana’s experience of being there was the perfect way in which to approach it. I actually contacted Jordana through Facebook and asked her if we could meet so I could interview her about her time in Germany. She agreed and we began to meet and talk on a regular basis for the next year or so.

What led to your book deal at Second Story Press?

I have been working with Second Story Press for many years. In fact, of my twenty-five books, Second Story Press has published twelve of them. The publisher, Margie Wolfe, is committed to publishing books about the Holocaust for a young adult readership. This book was a natural fit with SSP and in fact, the contract for its publication was in place before I even began meeting with Jordana.

Does your previous work as a psychologist inform your writing or your research methods?

I worked as a psychologist for twenty years, and I’ve been writing books for about that long as well. It amazes me that I am at this point in my life when I have worked at  two careers, back to back, for about the same amount of time! There’s no question that the work I did as a psychologist, and the skills I developed in that career are a part of the work that I do as a writer. I don’t know how those skills seep into my writing; I just know that they do. They are probably there in the way I interview survivors, in the way I think about the “characters” that I develop in my books, in the way I approach the more graphic parts of writing about this history, and in the way I talk to students and adults across the country.

If your readers are moved to seek justice regarding the past or to chart a better path to the future, but they are not sure where to start, do you have any recommendations?

Jordana is such a remarkable model of someone who is on a path to becoming an activist - speaking up about past injustices, thinking about how to be a leader in her community, envisioning a place for herself in developing a more just future. But her path to activism didn’t start with her attendance at the trial of Oscar Groening. It began when she was in school and was on a committee to develop a Holocaust Ed Program at her school. And it began when she participated in the March of the Living. And it began when she did an internship at the Museum of Tolerance in Los Angeles. And so on, and so on. In other words, any small step that you can take in your school, or neighborhood, or community can lead to bigger and bigger steps down the road. 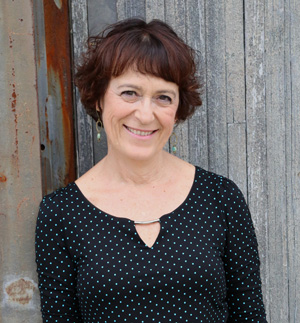 Find something you are passionate about. Join a group or committee that is focused on that passion. Read all you can about that subject. Learn from the people around you and from grown-ups who have come before you. You will slowly but surely find your voice within that group and will be able to find ways to express it outside of those groups.

How can teachers, librarians, and other interested parties contact you about speaking at their school or library?

I have spoken in thousands of schools, colleges, community groups, and libraries across North America and in parts of Europe, South America, and Australia. I love speaking to young people and to adults about my writing and the history that I am so passionate about. I would love to come and speak in your community. Please feel  free to contact me at my email address, info@kathykacer.com

It’s no surprise that I read a lot of historical fiction and a lot of stories that focus on the Second World War and the Holocaust. So here goes …

Visit the Association of Jewish Libraries website, the AJL blog, and the official Sydney Taylor site.

Check out my archive of author interviews.